February 24, 2021 - If Tyrone’s 2020 safety record was a song, it would simultaneously top the charts in Pop, Rock, Hip-Hop, Country and maybe even Jazz.

“You feel a lot of responsibility to be a role model for the young guys, and to look out for them and make sure they’re doing things right,” Jimenez said. “But what I’m seeing is a lot of new guys who are acting as leaders, who know if something is wrong to stop the job, so I think we have an even better future with our safety culture.” 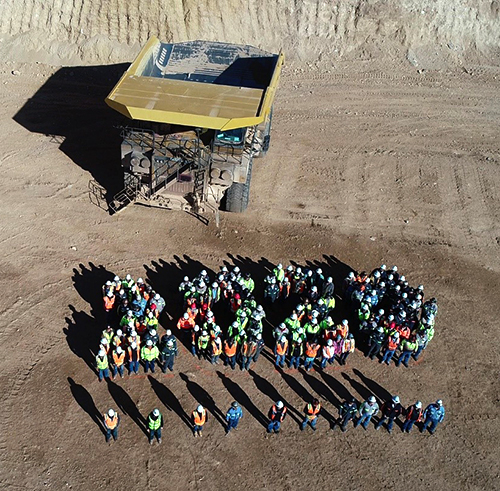 Not only did Tyrone operations in New Mexico have the best safety record of the company’s North American mines in 2020, but since February 20, 2020, the site also has gone an entire year – and counting – without a single reportable injury.

On top of that, the site won the 2020 Safe Operator of the Year award in the Large Mines category from the New Mexico Bureau of Mine Safety.

On an individual level, nearly every crew, or shop, received the 2020 New Mexico Mine Association’s Zero Frequency award for injury-free work.

“What these men and women just accomplished is truly amazing and world class. While Tyrone has gone a year at zero before, back in the ’90s, the measure was zero lost-time injuries,” said Erich Bower, General Manager-Tyrone. “The standard that was achieved this time was zero reportable injuries which is a much higher hurdle to clear. ”

As Tyrone Health and Safety Manager, Justin Taylor has had more than a few people ask him the one-word question: How? He’s come up with a one-word answer: Leadership, but he uses that word as a verb, not a noun.

For Frank Alvillar, what’s key to understanding Tyrone’s success is that safety doesn’t belong only to the Health and Safety department at Tyrone.

“The infamous question is ‘Where does safety live?’ It’s not at the health and safety office,” said Alvillar, Senior Supervisor-Health and Safety. “I’ll tell you where it is. Safety is with our employees out in the field – in the pit, in the tank house, on the leach pads, in the shops and in the offices.

“This didn’t happen by chance. Commitment and ownership rise when employees continually hear their leaders putting safety in the forefront of their conversations and even more when they see those words put into action, when we walk the talk!”

Leading by example at Tyrone doesn’t come any bigger than Safety Champion and haul truck operator Julio Jimenez, who has worked more than 40 years without a reportable injury.