June 26, 2020 - It was déjà vu for Safford operation’s Rescue Team, who recently found themselves on familiar ground when they helped county and municipal emergency responders safely pull a 10 year old and a teen from a deep hole at a popular recreational area near the city of Safford, Arizona.

Enriquez lives close to the area and was first on the scene.

“Frye Mesa is just up the road from me, so I drove my UTV up there and met a lady who directed me to where the kids were,” Enriquez said. “It already was nighttime and really dark out there, so I had to carefully search around with my cap lamp for a while before I found them.”

Enriquez eventually spotted a 19-year-old man who had been with the others before they became stuck in the hole.

“He was up on a rock waving his arms and calling me over to him,” Enriquez said. “He led me to the hole where the other two still were trapped.”

Shining his light about 20 to 30 feet down into the deep, creek-carved chasm, Enriquez saw a 14-year-old girl and a 10-year-old boy standing in a pool of water at the bottom. They had become trapped there while sliding down the slick, rock bed of the creek that feeds Frye Mesa Reservoir.

“The younger kids reached an area they thought was too dangerous to slide through, so they stopped and then could not get out of the hole they were in,” Enriquez said.

Though everyone from the group appeared unhurt, Enriquez noticed that the 19 year old was not wearing shoes and that the clothing the others wore was not sufficient to fend off hypothermia from long exposure to the frigid creek water. He radioed the arriving responders, requesting blankets and dry clothing.

“I stayed beside the hole and spoke to the kids to keep them calm while we waited for the other Rescue Team members, GCSR and Thatcher Fire Department,” Enriquez said.

After all the response teams arrived, they quickly coordinated a safe rope rescue.

“We used a main line and a belay line to pull the kids up one by one with a harness,” Enriquez said. “Because of the uneven rock facings and surfaces around us, we had to improvise with our resources to create a clear vertical zone for safely lowering and raising people.”

Working through the night and into the next morning, the teams safely pulled the two to safety.

Because the Safford Rescue Team frequently trains at Frye Mesa and has helped with other rescues in the area over the years, they were well prepared to assist with the response. In fact, many of the Rescue Team members also serve with fire departments and search and rescue teams away from work.

“This kind of thing is pretty common up there,” said McEuen, who explained the natural waterslide is a popular recreation spot among locals. “Most of the time, people can climb or get helped out of the holes, but sometimes they’ll end up in one that’s too deep and slick to escape without special equipment or emergency assistance.”

Enriquez and Bejarano coordinate many of the Rescue Team’s training programs at Frye Mesa and other local areas. The skills they and the rest of the team have learned are of great benefit to people on and off the mine site.

“Ray also volunteers with Thatcher Fire Department and Graham County Search and Rescue, and he has been instrumental in regularly training team members on ropes rescue,” Bleak said of Bejarano. “Other team members also help out GCSR and Pima Fire.” 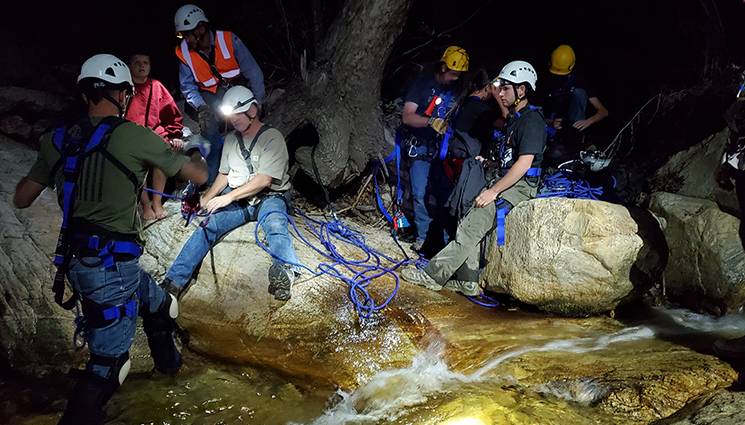