October 20, 2021 - The discovery of a rare mineral at the company’s Safford operation has presented a unique opportunity to support the traditions of an area tribe.

“Turquoise is sacred to the Apaches and to the medicine world, and these rocks are very beautiful, so we thank Freeport for bringing them to us,” said Cranston Hoffman, who is a traditional practitioner and medicine man.

Within the cultures of the Apache and other indigenous peoples throughout the southwestern United States, turquoise transcends the souvenir archetype familiar to most gift shop patrons.

“It has its own story and its own name in my language,” said Tanayia White, Lead Native American Affairs Specialist-Safford and San Carlos Apache Tribe member. “For the Apache, turquoise has deep philosophical and cultural meaning beyond its use as a mere adornment or memento.”

Acting on behalf of Safford operations, White facilitated the donation to the tribe in August.

“In all the years since our reservation was established, we haven’t had access to certain parts of our aboriginal homelands to harvest turquoise,” White said. “This likely was the first time the tribe has received such a donation, and it’s especially significant that it came from a mining company.”

“Two of our senior sampler technicians, Mike Bertoldo and Elizabeth Black, were picking up blast hole cuttings in the Lone Star pit and found fragments of an unusual, blue-colored rock,” said Michael Tharby, Senior Geologist-Safford. “It was different from the bluish chrysocolla mineral we typically find with copper ore, so we sent it to the lab and got confirmation that it was turquoise.”

The donation was proposed by Angela Roach, now Chief Geologist-New Mexico operations, who had initiated the process while serving as Chief Geologist at Safford.

“When I worked at Morenci some years ago, I learned about the importance of turquoise in the tribal community, and I knew we might come across some while mining,” Roach said. “After moving to Safford, I remembered the importance when we found some in the Lone Star pit.”

Roach credited the Safford Geology team for enthusiastically supporting her idea for the donation and carrying the torch forward after she transferred to New Mexico operations.

“They all were excited and honored to be part of it,” Roach said. “Mike Tharby took ownership, and not only did he have the area containing the turquoise identified, he also ensured the ore was set aside, and then he led the gathering of geologists for the handoff to the tribe.”

A day to remember

Shortly after the donation, Roach received feedback from the Safford participants.

“Several of the geologists reached out to tell me about the experience, and I’m certain this will be one of the stories they tell throughout their careers,” Roach said. “I am so happy that it all worked out, and hopefully, we will continue to find more turquoise in Lone Star, New Mexico or wherever.”

Roach was recognized by Safford leadership for speaking up and working with others to make the donation happen.

“We applaud Angie’s consideration of our tribal neighbors, who are among our key stakeholders,” said Jeff Monteith, General Manager-Safford Operations. “Her preparation for this important moment while she was at Safford exemplifies what being Empowered to Act is all about, and it demonstrates Safford at its Best; we know she similarly will elevate New Mexico operations with her initiative and leadership.” As the liaison between Safford and the tribe, White appreciates the value of her dual role – Freeport-McMoRan employee and San Carlos Apache Tribe member – in facilitating the turquoise donation.

“Through gestures of goodwill such as this, we’re building a communication bridge that connects my tribal community to our company, and I’m proud to be part of it,” White said. “It will pave the way for more successful collaboration in years to come.” 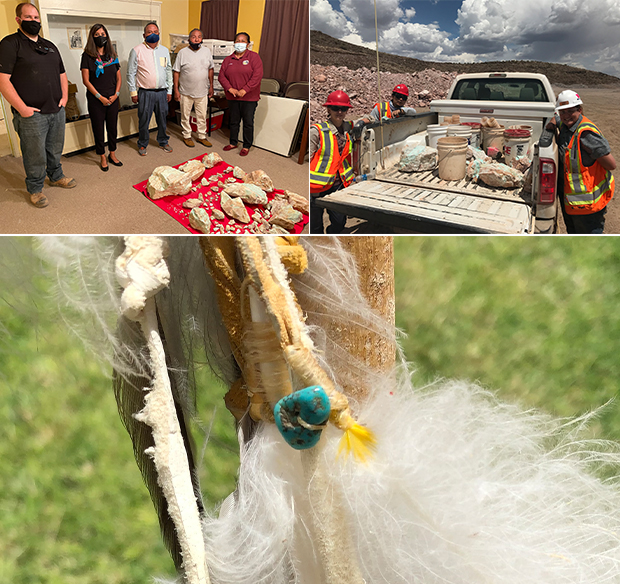