August 27, 2021 - Monarch butterflies are the international jet-setters of the insect world, and the company is helping them in their travels with a new pair of way stations in Arizona.

Work crews from the company and a dozen volunteers from a local school recently spent time planting hundreds of milkweed and other pollinator-friendly plants on company-owned sites near Miami and Bisbee. The result is essentially a rest stop for the monarchs during their annual migration that can extend from Mexico to Canada.

“They are such charismatic insects and their numbers have been plummeting recently,” said Ann George, Senior Scientist-Biodiversity and Sustainability. “Having these two garden sites as certified monarch way stations essentially provides another stopover spot for monarch butterflies. One of the reasons their populations have been declining is habitat loss. So being able to provide additional habitat both for the adult butterflies as well as the caterpillars is critical for the survival of the local populations.”

Milkweed is vital to monarch butterflies, whose cross-continental migration makes it a rarity in the insect world. Female monarchs search for milkweed plants to lay their eggs, and their caterpillars will only feed on certain types of milkweed, according to the Southwest Monarch Study, which is partnering with Freeport, the Pollinator Partnership and the Gila Watershed Partnership in the regional conservation effort.

The population of monarch butterflies has been in sharp decline for decades, driven by loss of habitat and other factors such as pesticides and herbicides and the prolonged western drought.

Freeport has maintained the gardens in Miami and Bisbee for years as part of its longstanding Pollinator Conservation Initiative to increase and maintain habitats for creatures that pollinate plants as they flitter from one to the other in search of nectar. But until now, neither was geared specifically toward monarch butterflies, George said.

The Southwest Monarch Study and Pollinator Partnership launched an initiative to improve the habitat for the monarch butterflies in the region after receiving a grant from the National Fish and Wildlife Foundation. Freeport got involved after Bill Cobb, Vice President and Chief Sustainability Officer, heard about the project and offered to help.

The plantings were done in Miami in late May and in Bisbee in mid-June.

The Miami site, located just off U.S. Highway 60, is easily accessible and is often opened to the public for tours and educational purposes. That allowed the company to enlist the aid of 12 students in the agricultural science class at Miami Junior-Senior High School, who helped the 10 company employees working on the garden.

After some initial instruction, they went to work digging holes and setting four different types of milkweed, about 325 plants in all. There are more than 100 species of milkweed, but monarchs favor only about 30 of them.

The three-acre Bisbee site is remote and not accessible to the public. Therefore, about 20 company employees put in the five varieties of milkweed and other pollinating plants, a total of 260.

The mix of milkweed with other plants ensures nectar sources are available throughout the year.

“The caterpillars need very specific plants,” George said. “They need milkweeds. Once the caterpillars become adults, they are generalist feeders. They will take nectar from any number of flowering plants. But the critical factor is having host plants for the caterpillars – and the host plant is milkweed specifically.”

The gardens in Miami and Bisbee will be monitored to collect data for an ongoing international study on monarch populations and migratory patterns.

Monarch butterflies are not endangered as a species, said Ron Rutowski, emeritus professor in the School of Life Sciences at Arizona State University and science advisor to the Southwest Monarch Study. There are stable non-migrating populations in North America. What is concerning is the number of migrating butterflies has sharply declined in the last 20 years.

Monarch butterflies east of the Rocky Mountains are the snowbirds of the bug world, traveling from winter havens in Mexico as far north as Canada in the spring and summer before heading back south in the fall. This all happens over the course of several generations.

Western monarchs are more like beach bums. They hang out along the Pacific coast from southern Baja to central California in the winter before scattering across the West in the spring.

Monarchs tagged in Arizona in the fall are a puzzle, Rutowski said. Tracking shows some travel to Mexico in the fall, likely to join the eastern migration. Others head to the California coast. But it appears some of the monarchs in Arizona stay for the winter.

Though small, the pollinator gardens packed with milkweed essentially become refuges in the vast Sonoran Desert for the weary-winged travelers.

“Monarchs are incredibly mobile, and they’re good at finding butterfly gardens,” Rutowski said. “These gardens, these couple-acre plots that the mining company is putting in, they do offer refuges. These are places where they can stop on the migration, places where they can get larval food plants, places where they can get nectar, and perhaps more easily in a higher concentration than they might be able to find out in the desert. So, it might help them just by easing the task that they have, the females in particular, of finding these milkweeds or finding nectar sources.” 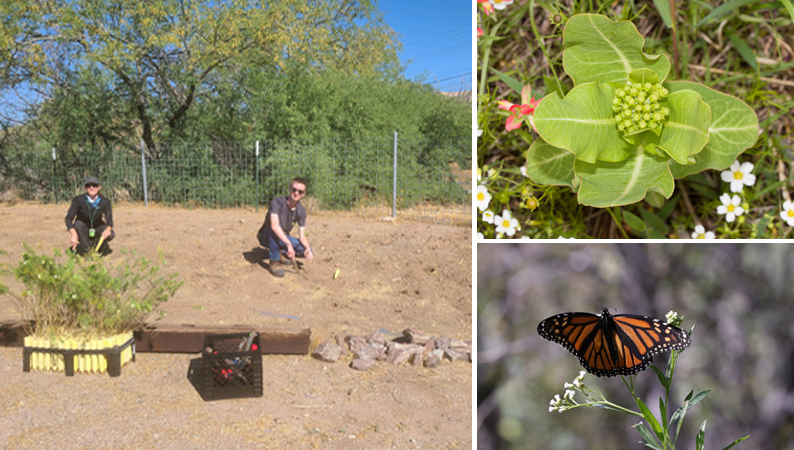