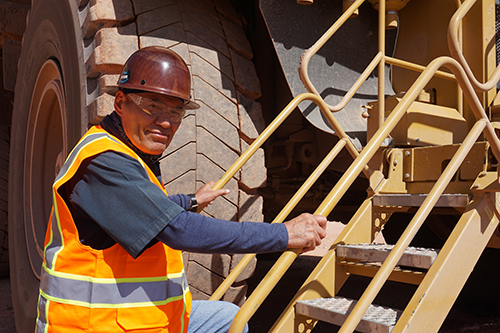 July 21, 2020 - Working 50 years at a single company mine site is rare, but Joe Herrera took that one step further by not only working for five decades at Morenci, Ariz., but doing so with a perfect safety record. Watch the video.

“I’ve had the good fortune to have worked in the mining industry for a long time but have not experienced anyone working 50 years without a reportable injury,” said Mike Kridel, Senior Vice President-Morenci. “Joe’s safety success is a testament to his dedication and commitment to Safe Production and is an example to us all. Whether someone is just starting out in mining, or has worked with us for 50 years like Joe, working each day without a safety incident is what we strive for with every employee.”

For Herrera, the focus on safety began during a two-year stint as an Army paratrooper in Vietnam.

“When in Vietnam, I learned to always pay attention to my surroundings, to be alert to what’s going on around me and to think about the consequences before doing anything,” Herrera said. “That’s how we stayed safe, and I’ve taken that same approach over my career working at the mine.”

After returning from Vietnam, Herrera came back to his hometown of Morenci, rested a month, and then went to work at the smelter, joining the company like his father and uncles.

Thanks to his father’s advice to “not to bounce around” from company to company, Herrera stayed at Morenci. He spent a couple of years at the smelter, was a haul truck driver and then spent 39 years as a journeyman blacksmith until the shop closed when he returned to haul truck operations.

As Joe heads into his 51st year at Morenci, he says his time at the company has been well spent.

“One thing about the company, I mean they are good to you. As far as an employee, it’s been a good life for me,” he said.

Photo: Joe Herrera is in his 51st year as a Morenci employee.