June 22, 2021 - After a year hiatus due to the pandemic, the company’s wildlife photo contest was back in action this year with almost 300 entries from employees around the world.

This year’s winning photos of an American Marten in Colorado and a Eurasian Spoonbill in Spain didn’t happen on a whim – they took patience, advance planning and a little luck.

Chris Schmitz, Chief Mine Engineer-Climax, almost missed his winning entry – the elusive and shy American Marten. He saw the small, relative of a weasel rush into the forest and grabbed his camera to follow. He hoped he would find the right tree, but he was not optimistic.

“You rarely see them, even though they live in pine trees at higher elevations,” he said. “But, I’ve been trying to have my cameras more easily available, so I grabbed my camera with the telephoto lens and hoped for the best.”

Manuel Gómez Cristóbal, Deputy Director of Procurement and Material Logistics-Atlantic Copper, wanted to capture the almost ballet-like movement of the Eurasian Spoonbill in Spain and succeeded with much planning and after spending five hours in a portable blind to blend in with his surroundings.

“I wanted my point of view to be practically at the same height as the bird's eyes and create a sensation of balance in the photo, which makes the bird seem to float in the frame,” Gómez said.

The Freeport-McMoRan Biodiversity Task Force selected the winning images from almost 300 employee entries showcasing diverse wildlife on and near company operations from around the world.

The two winning photos will appear on the company’s pages of the Wildlife Habitat Council’s 2022 Weekly Engagement Calendar highlighting efforts by WHC members, such as Freeport-McMoRan, to enhance and conserve wildlife habitat on and adjacent to corporate lands.

Here’s more about the winning photos and the species featured in each:

American Marten, or Pine Marten, near Climax mine in Colorado 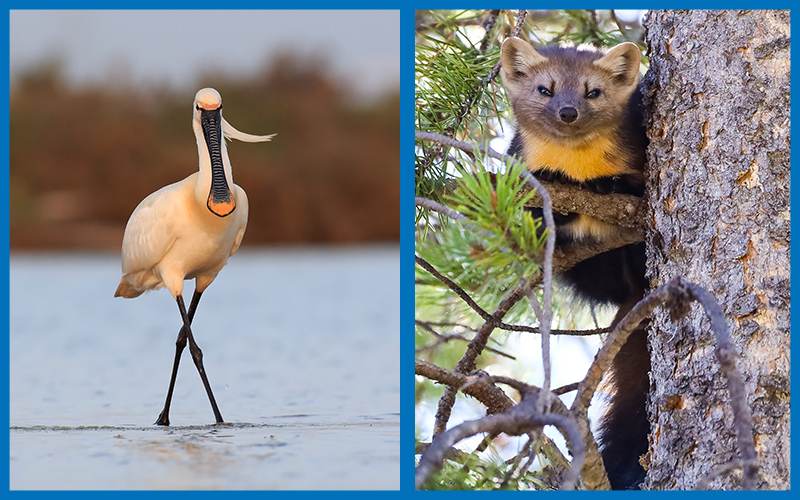 Photos: This year’s photo contest winners are a Eurasian Spoonbill in Spain (left) and an American Marten in Colorado.