The scope of the assessment was consistent with our Human Rights Dashboard, which summarizes human rights topics relevant to our mining-related activities. However, certain dashboard topics have limited relevance to Cerro Verde given its location and activities, such as artisanal mining, resettlement and indigenous peoples.

Refer to our 2017 WTSD Report for an overview of both the process and key findings.

Verisk Maplecroft presented the HRIA findings and recommended priority areas for further action to the site-level management team in late 2017. In 2018, the team reviewed the findings and recommendations together with the Corporate SD team. They also updated their SD Risk Register to reflect any newly identified human rights risks.

Many of the risks and impacts identified already were subject to established human rights-relevant management systems at Cerro Verde. Where the findings identified actual or potential gaps in such management systems, cross-functional teams developed action plans. Actions were prioritized considering the severity of impact, whether there was an actual or potential impact, the time sensitivity of remediation (e.g. the likelihood of continued harm) and company influence / leverage.

Action plans support the continuous improvement of existing systems and processes, and where necessary, establish new measures to investigate, avoid, mitigate and/or remedy human rights risks and impacts. In some cases, action plans required further investigation of alleged impacts as a first step, due to uncertainty around supporting facts and/or the causative relationship to Cerro Verde. Actions are tracked by the Cerro Verde’s Human Rights Compliance Officer.

The Cerro Verde HRIA identified certain perceptions in relation to the mine. This included the view held by many community stakeholders that Cerro Verde is a major, ongoing contributor to dust and particulate matter (PM) in the City of Arequipa, communities in the mine’s area of direct influence and beyond. While all mining operations have environmental impacts, Cerro Verde maintains a transparent air quality monitoring program as well as ongoing publication of its monitoring results. This view seems to largely ignore both this and other potential causes behind general dust exposure levels, including the arid, windy desert context, other economic activities, and an ongoing increase in private traffic in a city of a million people. Such perceptions highlight the importance of Cerro Verde’s participatory environmental monitoring program and the desire to build more trust.

Air monitoring program
Cerro Verde has undergone two large-scale expansion projects in recent years, with the most recent completed in 2015. The ESIAs associated with these expansion projects highlight the mine’s robust air quality monitoring program. This includes seven air monitoring stations in operational areas and five air monitoring stations in non-operational areas in Quequeña, Tiabaya, Uchumayo, Hunter and Yarabamba. This monitoring program tests for parameters, including PM10, PM2.5, PM10 arsenic, PM10 copper and PM10 lead, in addition to certain gases. The frequency of monitoring varies from every six days to every six months depending on the parameter. Results are reported to the Peruvian Environmental Agency (OEFA) on a quarterly basis, and they consistently have complied with OEFA regulations. 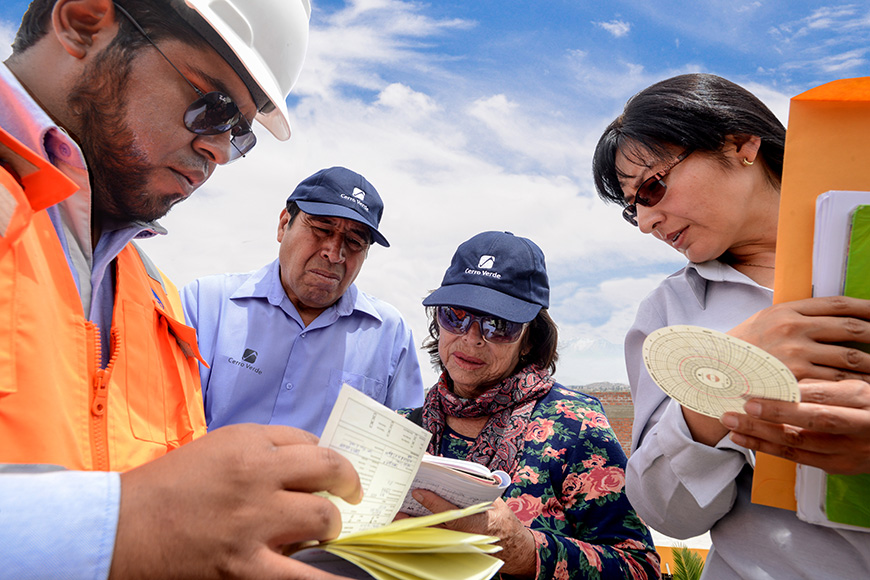 In parallel, Cerro Verde implements a participatory air monitoring program in five districts. The program is a voluntary commitment established in the 2004 ESIA that has been implemented since 2005. Under this program, participatory air monitoring is conducted four times a year with municipal authorities, national government, civil society and Cerro Verde all participating. Participants take part in a one-day training session prior to sampling activities. During training, Cerro Verde presents the previous session-monitoring results, explains the legal, technical and social aspects of the program, and addresses questions and suggestions from participants. Air samples (PM10 and PM2.5) are then taken from the monitoring stationsby an accredited laboratory (in the presence of a notary) over a 24-hour period. The laboratory processes the samples and reports the results to Cerro Verde, which then communicates the results to both the municipality and OEFA. Stakeholder group participants have included environmental specialists, engineers, local, regional and / or national authorities, farmers, professors, doctors, community leaders, institutions such as public and private universities, professional associations, and community members. As specified in the 2004 ESIA, participatory monitoring takes place in Uchumayo, Yarabamba and Tiabaya (all within the area of direct influence of the mine) as well as in Hunter (at the request of the district) and Quequeña (due to wind patterns). 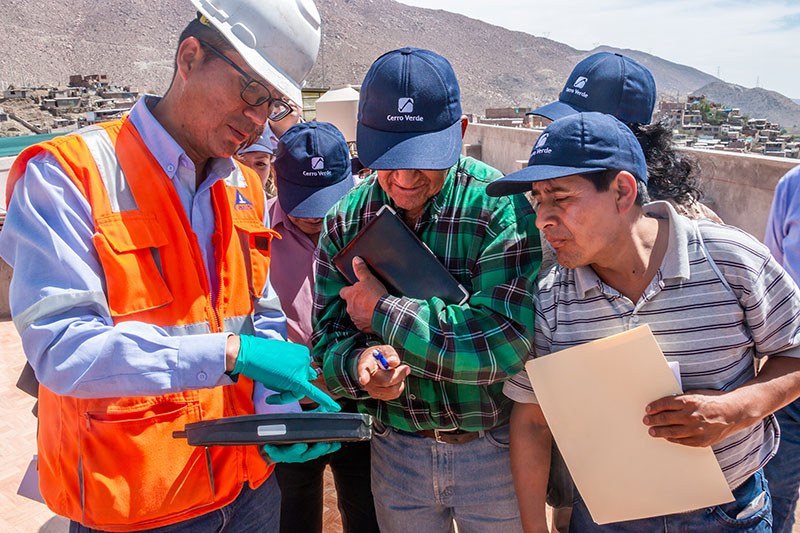 In 2016, Cerro Verde also voluntarily initiated a separate three-year participatory air monitoring program in Socabaya at the request of the municipality and local residents. In addition to responding to stakeholder concerns regarding Cerro Verde’s impact on local air quality, the program will establish a baseline for comparison. Results to date show no air quality impacts by Cerro Verde in Socabaya. The Socabaya air monitoring program extends beyond the voluntary commitments set out in the ESIA and reflects a beyond compliance approach on the part of the mine.

In 2018, OEFA conducted an environmental evaluation process in the Cerro Verde area of influence. OEFA measured Cerro Verde’s environmental performance based on a set of indicators related to air quality (emissions) and underground and surface water quality. During the yearlong process, air and water monitoring locations were identified, existing conditions were verified and subsequent monitoring was conducted. The air monitoring stations used for this process were the same as those used for the two programs described above. OEFA data is public information, and OEFA is expected to publish the results of the evaluation in 2019. By providing another mechanism for third-party verification, the OEFA-led process is providing Cerro Verde an opportunity to address perceptions identified in the HRIA.

The Cerro Verde HRIA results confirmed that Cerro Verde’s grievance mechanisms, particularly those operated by the Community Relations and Legal teams, are effective in capturing and addressing human rights-related complaints and incidents. Nonetheless, the HRIA identified additional actual and alleged impacts relating to Cerro Verde and its partners. This included, for example, claims by an anonymous stakeholder that a small number of workers may be experiencing serious health impacts linked to on-site activity as addressed above. In addition, the HRIA included reference to the mine’s possible, and in many cases, limited contribution to a number of collective impacts that may not get captured by conventional grievance mechanisms, such as dust and water security. Furthermore, it provided useful insight into broader human rights dynamics and stakeholder perceptions.

The Cerro Verde HRIA included a parallel exercise to identify the degree to which Cerro Verde positively maintains and / or advances human rights within its area of influence. Cerro Verde’s adverse impacts are of a relatively low severity while the mine generates significant positive benefits, making for a net positive contribution to its stakeholders. While understanding that positive human rights impacts cannot offset negative impacts, this exercise provided a more comprehensive view of our overall human rights performance.

In early 2018, the results of the Cerro Verde HRIA were shared via a set of international stakeholder teleconferences focused on our human rights program. Key findings also were included in Cerro Verde’s 2017 Sustainability Report (pages 24-25), which is in Spanish and available on Cerro Verde’s public website as well as its intranet site. Copies of the report also are available in Cerro Verde’s three community information offices, which are located in the districts of Arequipa, Uchumayo and Yarabamba.

Lessons learned from the Cerro Verde HRIA are helping to guide our global human rights approach and site-level HRIA work at other operations.

In 2018, as part of a voluntary commitment established in its ESIAs, Cerro Verde worked with more than 1,100 community members, engineering associations, government institutions and local universities  to test air and water quality around its operations. Above, participants examine an air filter after 24 hours of monitoring.